← ARC Review: A Chance to Preview One More Day
Why I Love Laura Ingalls Wilder →

A Hunt To Remember, Just One Little Word 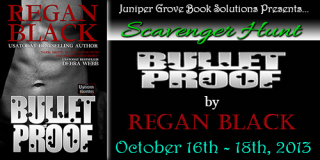 Years ago, I piled into a car sitting in the middle of the back seat squeezed between all my coworkers. I’m short. I always get squished in the middle and I’m ok with that. Especially if I’m doing something fun, and that night I could hardly sit still. It was my first scavenger hunt ever, a really great time. We laughed, we told quite a few jokes, and we raced destination to destination, snapping pictures as proof to meet the clues.
And on that note, welcome to the Bullet Proof Scavenger Hunt.
This is a different sort of scavenger hunt, a hunt for words to complete the excerpt of the novel, and a really great one at that, Bullet Proof, by Regan Black. So hop along to each blog, and collect all of your words. This is your chance to score a gift card from Amazon.com, check out some fun bloggers pages, and build a neat snapshot of the story… 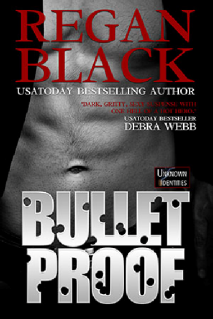 To avoid a dishonorable end to his decorated military career, John Noble made a deal with the devil. He gave up his name, endured harrowing training, and accepted every mission thrown at him for one purpose: redemption.

When he accepts his latest orders, providing personal security for a reporter in trouble, he bargains hard to guarantee it will be his last job for the shadow agency he knows only Unknown Identities (UI).

An ambitious reporter, Amelia Bennett, is about to break the story of her career, if she lives long enough to tell it. Caving to her boss’s demand, she hires a bodyguard and soon it is obvious John Noble is the only obstacle standing between her and certain death.

Just when John believes he has found someone he can trust and love, who loves him unconditionally for who and what he has become, his orders are amended: Amelia Bennett is to be terminated.

Introducing Unknown Identities: an alternative for elite soldiers and spies facing criminal charges… if they can survive the program. Don’t miss Double Vision, the next installment of this sizzling, action packed series.

About the Author:
Regan Black, a USAToday bestselling author, writes award-winning, action-packed paranormal romantic suspense and urban fantasy novels featuring kick-butt heroines and the sexy heroes who fall in love with them.

Raised in the Midwest and California, she currently makes her home with her family, two retired greyhounds, two arrogant cats, and two quirky finches in the South Carolina Lowcountry where the rich blend of legend, romance, and history fuels her imagination.

Amazon Author Page | Facebook | Twitter | GoodReads | Website
Deleted Scene from Bulletproofby Regan Black:
Amelia’s gaze kept sliding to John’s hands as he traced the _______ scars on her grandmother’s kitchen table. Those hands had battled to preserve her life twice this morning. _______ of writing the story that put her in danger, she found herself wanting to _______ more about the enigmatic man sitting across from her.
He looked up and caught her staring. “Did your grandmother have any connection to Senator Larimore?”
“Less than you,” Amelia said, referring to the picture she’d _____ online of John serving on the protection detail for the senator’s daughter. “Why?”
“You said it yourself. Larimore has too much access to ________ and everything. Including, or more accurately, you. We ____ to assume he knows about this place and drove you out of the city for a reason.”
Amelia considered that. Her apartment in ____ Bay had been trashed, her meeting with her _______ interrupted before she could get what she needed. “He couldn’t know I’d come all the way out here. The threats were only vague and creepy, nothing direct or personal, until the attacks today.”
A ______ chill prickled along the back of her neck. Today’s attacks had ____ so close to succeeding. Without John…
“You were closing in on the truth,” he said. “He had to escalate. I think it’s a good sign he didn’t know you hired me to run interference.”
She wondered now why she’d been so resistant to her boss’ idea of a bodyguard. “You’ve been a big help.”
He shrugged. “That’s my job.” Standing, he paced ____ from the table pausing to lean against the counter at the other ___ of the kitchen. “He thinks he’s untouchable.”
She’d come to the same conclusion. “Until now, he has been. You said this house is defensible.”
“It absolutely is.”
“But?” He merely raised an eyebrow, and gestured for her to continue. “It’s also isolated.” The _________ half-smile tilting his lips felt like a much bigger _______. “You’re suggesting the senator wanted me out of the city so I would be easier to kill.”
“You have a big, public fan base in Boston and you don’t have a reputation for being intimidated.”
“I’m flattered you ______ into my rep.” She held up a hand, halting his protest. “Just kidding. I know it goes with your job.”
“I didn’t want to take this one.”
His whispered admission turned her thoughts sharply away from Larimore. “Not a fan of my work?”
He shook his head.
_____. It wasn’t the first time a guy _______ her profession as an irritant, turn off, or intrusion. Assuming John Noble kept her alive, it wouldn’t be the last time. Uncomfortable, she shifted in her seat and ________ to the safer topic. “Isolating me is a valid plan.”
“The logical assumption is he thinks this location will make it easier to eliminate you without any of the blood getting on his hands.”
A terrified tremor rattled _______ her and she laced her fingers together so he wouldn’t see her hands shake. “Are you always so casual about life and death stuff?”
“I’m much more _______ about death.”
She wished she could convince herself he was joking.
Giveaway Details:
There is a giveaway for everyone who successfully completes the scavenger hunt by turning in the excerpt with the key words in the correct places. Prizes include the following:
Don’t Forget to Jump Along to Your Next Stop!

All tour information is here: http://junipergrovebooksolutions.com/bulletproof-regan-black

*Don’t forget to find and write down the word in green.
Thanks for reading.

Posted on October 18, 2013, in Uncategorized. Bookmark the permalink. 4 Comments.

← ARC Review: A Chance to Preview One More Day
Why I Love Laura Ingalls Wilder →