Lingering Echoes: A New YA Book I Can’t Wait To Get My Hands On

I can’t put my finger on the exact reason why some books make me so super excited to read them. Whatever it is, I’m getting these vibes for this one, Lingering Echoes. Hopefully in the next week, I’ll be previewing it. I’ll be writing up my review to post November 19, so stay tuned …

… And here’s a bit about this new book. 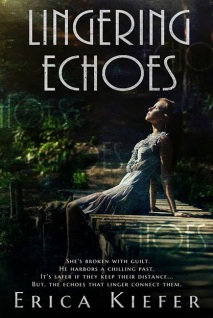 Title: Lingering Echoes
Author:  Erica Kiefer
Published:  November 1st, 2013 by Clean Teen Publishing
Word Count:  86,000
Genre:  NA/YA Contemporary Romance
Recommended Age:  14+
The Back of the Book
She’s broken with guilt.
He harbors a chilling past.
It’s safer if they keep their distance…
But, the echoes that linger connect them.

Returning to Hidden Pines is the last thing Allie Collins wants to do during her final summer before college. For her, the family cabin she spent her youthful summers in, now holds a dark memory that has haunted her every day for the last year.

While struggling to forget her past, Allie runs into Damien, a local rebel with secrets of his own. He’s dark, dangerous and he keeps showing up when Allie least expects him to. She has every reason not to trust him. So why does she find herself opening up to him in a way she hasn’t been able to with anyone?

As pieces of Damien’s identity emerge, answers to a rumored mystery begin to unfold. By the time Allie unearths the secrets of Damien’s past, she realizes just how intricately they are connected. Now she is caught in a dangerous battle that threatens her life and those she loves.

Erica Kiefer was born on Christmas Eve in Southern California to an American father whose ancestors arrived from Europe during colonial times and a Thai mother who moved to the US during high school. Adding to her rich and varied heritage, Erica grew up living abroad in Asia, including Taiwan, Fiji, Thailand and Indonesia. She gained a great respect for the beautiful mosaic of cultures found in various parts of the world. After graduating from International School Bangkok, she attended Brigham Young University in Utah, where she earned a degree in Recreation Therapy. Her career as a Recreation Therapist has allowed her to work with at-risk youth since 2007.

Erica made the best decision of her life by marrying her husband in 2005 and is currently a mother of three, one of whom awaits her in heaven. Erica also loves singing, reading, writing, and satisfying her sweet-tooth with chocolate-chip cookies. Playing collegiate rugby was one of the most memorable experiences of her life, thus far.

Erica’s first book, Lingering Echoes, was signed by Clean Teen Publishing and is scheduled to release in early November 2013.

My hand brushed against the coarseness of the tree trunks, tracing the lines and curves of the bark with my fingers. Haunting laughter filled my mind, bidding me towards the river I knew too well. With an aching heart, I followed. I kneeled by the river’s side, collecting the fallen pine needles and cones. I tossed them in, watching the ruthless current drag them along. The leaves glanced off protruding boulders before they were sucked underneath the surface.

I let out a long sigh and glanced upwards, allowing drizzling rain to kiss my face. A silent flash of light lit up the darkened sky, followed by a mumble of thunder. As the sky shed its heavy tears, I remained huddled on the muddy soil, staring up into the grayness.

The abrupt rumble of a motor caught my attention, clashing against the sounds of nature. I stood up, straining my eyes through the curtain of rain to find its source. Across the river I could make out a figure on a motorcycle. He was dressed in dark clothing, his head sheltered with a helmet.

He seemed to be staring at me.

Curious, I stared back. Neither of us moved.

What was he doing out in the rain? He was probably wondering the same thing about me, wondering what I was doing outside all alone. Wiping water from my eyes, I took a step backwards, not taking my eyes off him. Why was he was still staring? I stepped backwards once more, assessing this stranger.

He revved the motor, once, twice, three times. Then he seemed to come to a decision. His bike roared towards me, closing the gap between us. The bridge was off to my right. I didn’t wait to see if he was going to cross it.

Unsure of his intentions, instinct told me to run. I spun around, sprinting towards the cabins. Adrenaline fueled my blood, warming my cold limbs, as I dodged trees and bushes. I didn’t look behind me, even when I was sure the motor was becoming louder, closer. I kept running.

The cabins were in sight. Only then did I dare to glance over my shoulder, my heartbeat thumping in my ears too loudly to hear the motor for sure.

Posted on November 1, 2013, in Uncategorized. Bookmark the permalink. 2 Comments.