← Reflections On A Trip To Boston – Part I
Book Blitz: Witch Hunt by Kasi Blake →

MINOTAUR, by Phillip W. Simpson, takes you back to Ancient Greek and Roman times when poets and bards told the histories of kings and legends.

There are two main characters: Publius Ovid Naso (Ovid) a Roman Poet; and Ast, a giant from the top of his head to the rumble of his voice, a man who also bears a huge secret about himself.

The reader is first introduced to the poet Ovid who seeks to experience some of the places he’s written about in his poems first-hand. He exits his ship and meets Ast shortly, his proclaimed escort to the palace of Knossos.

As Chapter One progresses, Ast reveals his true identity as the Minotaur, the feared legendary beast, an immortal man half-human half-God born more than a 1000 years before. Impossible? That’s what Ovid thinks at first. However, Ast is very persuasive. He wants to set the record straight about his past and is adamant Ovid should tell his story to the public to clear his name of the atrocities he swears he never committed.

“Something strange was happening. Ovid, despite his misgivings, was hooked now. Even if he wanted to run, he knew he wouldn’t.” (MINOTAUR)

The style of writing seemed true to the time, reminding me of all the Greek and mythological epic stories I’d read back in school: The Iliad, Beowulf, The Odyssey and even one of my favorite Greek plays “Medea”, which made its own way into this book. A different sort of read for me, MINOTAUR is an excellent tale with vivid and original interpretations of famous historical and mythical beings like Medea herself, Icarus a real man who invented a set of human wings, giant man eating turtles, and other family and friends so full of life they become real:

“… A simple fisherman casting his net out into the waves. He was old and bronzed and so slim he looked emaciated. Thin wisps of gray hair failed to hide his almost complete baldness. He saw me, and his eyes widened with surprise or perhaps fright. I must have cast a strange image. Clad only in a loincloth and my bull’s helm. he might have first surmised that I was some god emerged from the sea. Perhaps Poseidon himself. ” (MINOTAUR)

I am a huge nature lover. The scenes with Ast’s affinity for friendships with animals were some of my favorites.

“I lifted my head, examining the creature underneath me. It was, of course, a dolphin. I might’ve been lucky. I might’ve been in the right place at the right time. But it did occur to me that perhaps, just perhaps, my father was taking an active hand in my fate.” (MINOTAUR)

Many moments of unjust deeds committed to Ast tugged at my heart. I definitely took a few breaths and paused on the pages, but Ast’s naïve and honest nature kept me going,  and I wondered if this kind soul would ever catch a break. And the end? It was so worth it! If you want a vivid book where you find yourself thinking about the endearing characters and relationships, where scenes and thoughts from the story slip into your dreams at night, then you’ll love this book just like I did.

I would have given it five stars had the first few pages had fewer unnamed strangers making it difficult to follow. 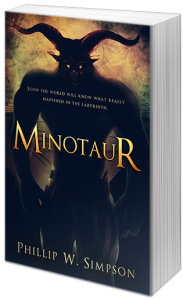 “Where shall I start?” asked Minotaur.

Ovid made an expansive gesture with both hands. “Where else but the beginning of course.”

Minotaur nodded his huge head. “Yes,” he said. “Yes,” his eyes already glazing over with the weight of thousand year old memories. And then he began.

So begins the story of Asterion, later known as Minotaur, the supposed half bull creature of Greek legend. Recorded by the famous Roman poet, Ovid, Asterion tells of his boyhood in Crete under the cruel hand of his stepfather Minos, his adventures with his friend, Theseus, and his growing love for the beautiful Phaedra.And of course what really happened in the labyrinth.

This is the true story of the Minotaur.

Where Can You Get The Book?

Good Reads, is a good place to see more about the book.

Phillip W. Simpson is the author of many novels, chapter books and other stories for children. His publishers include Macmillan, Penguin, Pearson, Cengage, Raintree and Oxford University Press.

He received both his undergraduate degree in Ancient History and Archaeology and his Masters (Hons) degree in Archaeology from the University of Auckland.

Before embarking on his writing career, he joined the army as an officer cadet, owned a comic shop and worked in recruitment in both the UK and Australia.

He is represented by Vicki Marsdon at Wordlink literary agency.

When not writing, he works as a school teacher.

Thank you for stopping in today. Have a hope-filled, rest of your day. 🙂

Posted on September 22, 2015, in Uncategorized. Bookmark the permalink. 1 Comment.

← Reflections On A Trip To Boston – Part I
Book Blitz: Witch Hunt by Kasi Blake →