← Secret [of the Souls] No Longer
Rapunzel Gets Hair Cut →

Today, I’d like to introduce a fellow author friend of mine, Danielle Shipley. She has recently published a pretty awesome novel with J. Taylor Publishing and today, it’s my turn to shout the good word as loud as I can. Not only am I sharing her beautiful cover and a few great pieces about her book Inspired, but she’s also given me a great top ten’s list. So scroll along with me, and take a peek at this lovely new book. 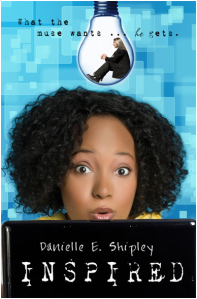 For a muse like Lucianíel, one story’s end is another’s beginning.

In the wake of his author’s sudden death, Luc takes ownership of her surviving creations—four fantastical characters with tales yet to be told—saving them from unwritten lives crumbling around them and giving them a second chance at a literary future.

Luc finds that chance in the unsuspecting mind of Annabelle Iole Gray, a quirky teen with her head in the clouds, nose in a book, and imagination ripe for a brilliant muse’s inspiration.

Or so he hopes.

Neither Luc nor Annabelle, however, realize all they’ve undertaken. Even with a to-write list including accounts of a shape-shifting cat creature, gentle knight-in-training, vigilante skater girl, and a mystery boy smothering in unspoken fear, the most remarkable saga created between author and muse just may turn out to be one stranger than fiction.

Check Out The Great Excerpt

One: Beginnings and Endings

There are people, Luc found, who are very good at having ideas—needing only to live and to be—not even to think, as active thought might only get in the way. Ideas will fall into their laps, as if from nowhere.

Of course, nothing truly comes from nowhere. Everything must have its start, including—and especially—ideas.

The source of an idea, however, is not always as easily found as the idea itself. Some people remain content never to explore where their ideas began, being merely glad of the results, whereas others become so enamored of beginnings, they have difficulty casting their gaze much further ahead than the starting point.

Jean St. John was the second sort of person—one full of ideas, brimming with beginnings. As she drove through the gray-covered morning toward her workplace, an ending was the farthest thing from her mind.

Manicured fingers rapped paradiddles on the steering wheel. Vermillion lips murmured nothing in particular, and pulled into a smile. “I dreamed a dream, this night gone by.”

“A dream of me?” Luc asked, glad of the conversation—anything to distract him from the gloom of the sky.

She chuckled. “What else? They’re always of you. You, but not you. His hair fell too short, and I remember something about violins, which has nothing to do with you. Or can you play?”

“No,” he said, dismissively. “My voice is music enough.”

She did not need to utter a word on the matter for him to know she’d always thought so. “And he didn’t glow golden, but almost silver,” she said instead. “Ethereal silver, like bright moonlight on water. Was he water? A water spirit? Mmm, no, far more to do with air. Even fire.”

“A mystery elemental,” he mused. “Sure to be quite the character, my dear. But what is the story?”

She shrugged. “I suppose there’s a romance. He strikes me as the romantic type. And I may have caught a glimpse of her, an inkling of dark passion … Who is she? Another elemental. Water to his fire, or earth to his air … or a human. Which would be worse?” she asked.

He laughed. “Nothing worse than a human.”

“Jean …” he said in kind. Gaze snapping past her, he barked without music, “Jean!”

The word’s echo grew into a thunderous crash as a midsized monster too much in a hurry to heed a red light hit her silver sedan. With nothing to restrain him, as he never wore seatbelts, Luc shot through the shattered windshield and out onto the pavement slick with the remains of scattered showers.

In no pain, but greatly shaken, he rose. The eyes of the driver at fault appeared glazed with confusion. Oh, has ignoring the traffic laws led to disaster? Inconceivable! Luc spared the fool no more attention, turning it all to one who mattered more.

He leaned over the misshapen hood of the stranger’s car to the crumpled door of hers, calling her name. She did not move, and gave no answer, all her ideas leaking away into a crimson pool.

Luc stepped away, his face a perfect, pallid blank, staring at the end of his world.
[…]

Danielle E. Shipley’s first novelettes told the everyday misadventures of wacky kids like herself. …Or so she thought. Unbeknownst to them all, half of her characters were actually closeted elves, dwarves, fairies, or some combination thereof. When it all came to light, Danielle did the sensible thing: Packed up and moved to Fantasy Land, where daily rent is the low, low price of her heart, soul, blood, sweat, tears, firstborn child, sanity, and words; lots of them. She’s also been known to spend short bursts of time in the real-life Chicago area with the parents who homeschooled her and the two little sisters who keep her humble. When she’s not living the highs and lows of writing young adult novels, she’s probably blogging about it.

Some of my biggest inspirations for INSPIRED have been my own characters. But of the fictional people who don’t live in my head, my Top Ten Inspirational Characters (in no particularly order) are…

1 = Robin Hood. Yes, I’ve created my own version of him, but only after meeting some of the fine fellows who carry his name in the writing of others. He makes me want to go out and spit in the eye of injustice. …and/or buy some green tights.

2 = L.M. Montgomery’s Anne “of Green Gables” Shirley. Because she reminds me that even artistic weirdoes who crave bosom companionship and must occasionally wallow in the depths of despair can be considered wonderful by untold numbers of fans. That is encouraging news for me.

3 = Agatha Christie’s Hercule Poirot. His stories more than any others give me the itch to write a really good murder mystery, someday. He also gives me hope that I, too, could be a brilliant private detective, if only I could be bothered to be orderly and methodical.

4 = J.R.R. Tolkien’s Aragorn. I haven’t even come up with reasons. It could be the swordsmanship, the ranger skills, or the fact that we first see him creepin’ in a corner with his hood up. All I know is that I saw him in the “Lord of the Rings” movies and wanted to be him.

5 = The Kraken. As in, the giant squid monster in “Pirates of the Caribbean: Dead Man’s Chest”. Again, the reasons escape me, but it turned me into a fiend for tentacles whose latest National Novel Writing Month project centered around my own spin on the sea beast, so there you have it.

6 = Francis Hodgson Burnett’s Sara “A Little Princess” Crewe. The patient, dignified way she held up under such appalling grief and mistreatment astounds me. Under comparable circumstances, I fear I would have snapped and ended up hauled away to prison on several counts of homicide. As I touched upon earlier, I really don’t dig injustice.

7 = Santa Claus. What? The man’s a saint who yearly defies all laws of reality in the name of bringing children joy. I call that awesome, and one day I’ll probably have a novel centered around him, too (as contrasted with that one project I’ve already written in which he’s only a really important side character).

8 = Wishbone. Anybody else remember “the little dog with a big imagination” on PBS in the ‘90s? That show made my little girl self want to go out and tackle the hefty literary classics! The fact that I didn’t actually end up reading most of them is beside the point. (Wouldn’t you know it? The actual “Three Musketeers” by Dumas didn’t feature an adorable Jack Russell terrier. Such a shame.)

9 = Jim Davis’ Garfield. It was either this comic or Bill Watterson’s “Calvin and Hobbes” that made me toy with the dream of becoming a cartoonist. I eventually came to the realization I don’t have enough passion for it to pursue learning how to draw/be funny with the necessary consistency, but I’ve still got countless horrible strips, a comic book-and-a-half, and some doodles of me and my Wilderhark Tales tailor to show for it.

10 = The gods of Olympus. …plus Hades! Greek myths have intrigued me since my mom forced me to soldier through Homer’s “Iliad”, and so help me, I will someday get around to completing a novel revolving around these crazy immortals!

Lastly all, please sign up for some great free stuff with a Rafflecopter giveaway.

Happy Monday, all. May it be great. 🙂

Posted on April 14, 2014, in Uncategorized. Bookmark the permalink. 2 Comments.

← Secret [of the Souls] No Longer
Rapunzel Gets Hair Cut →