← Cold Hands. Warm Hearts.
Pygmalion Sculpting Art, Or Groping At Something Else? →

Announcing the Trails in the Sand Book Blitz 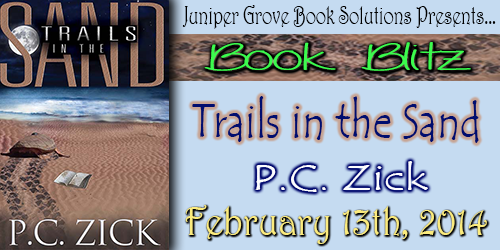 I couldn’t turn down the chance to take part in today’s book blitz for Trails in the Sand, by P.C. Zick. I love everything nature, and family, and adventure, all the key words I saw while reviewing the back of the book. So here it is. Take a peek. Maybe you’ll love the book too. 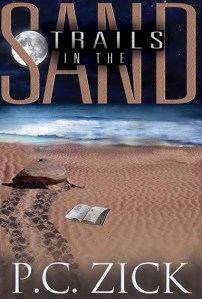 Title: Trails in the Sand

Synopsis: Trails in the Sand follows environmental writer Caroline Carlisle as she reports on endangered sea turtles during the Deepwater Horizon oil spill. As she delves into the story, she uncovers secrets about the past that threaten to destroy her family unless she can heal the hurts from a lifetime of lies.

Her journey reveals the truth behind mysteries that have plagued her family for three generations.

Lost journals, a fake tablecloth, and nesting sea turtles lead her to discover why her uncle committed suicide, why her sister developed anorexia, and why her mother only wanted acceptance from those she loved.

Caroline and her husband Simon discover love lasts despite decades of separation when he was married to Caroline’s sister. Caroline’s niece Jodi, caught in the crossfire of family tensions and lies, struggles to find a way to forgive the past so she can move into the future.

Trails in the Sand explores the struggles to restore balance and peace, in nature and in a family, as both head to disaster. Through it all, the ancient sea turtle serves as a reminder that life moves forward despite the best efforts to destroy it.

A Bit About the Author.

P.C. Zick’s career as a writer began in 1998 with the publication of her first column in a local paper. By day, she was a high school English teacher, but atnight and on vacations, she began writing novels and working as a freelance journalist. By 2001, she left teaching and began pursuing a full-time gig as a writer. She describes herself as a “storyteller” no matter the genre.

She writes three blogs. She’s working on her sixth novel, Native Lands. Live from the Road was her first venture into self-publishing in 2012. Trails in the Sand followed in January 2013. She’s also re-issued two novels previously traditionally published.

She also writes nonfiction. From Seed to Table is a collection of blog posts about gardening and preserving produce. She’s also published her great grandfather’s Civil War journal, Civil War Journal of a Union Soldier.

Her blog and her novels contain the elements most dear to her heart, ranging from love to the environment. She believes in living lightly upon this earth with love, laughter, and passion.

She resides in Pennsylvania with her husband Robert.

And A Chance To Win.

There is a tour wide giveaway. Prizes include the following:

Here’s a Quick Peek At What You’ll See Inside…

Excerpt from Trails in the Sand by P.C. Zick:

Alex and Gladdy Stokley sat on the sand as the reddish glow from the setting sun disappeared and left the beach shrouded in darkness. The light of day remained only in memory as the waves rhythmically beat upon the shore where the brother and sister sat in silence.

“Moon’s rising,” Alex said half an hour after the sun left the horizon. “See the light edging its way over there? It’s going to be full tonight.”

The tide was going out as they sat on a linen tablecloth that served as a blanket; they smuggled it out of the family’s beach house as they escaped the rage of their father an hour earlier. Alex produced a crumpled pack of cigarettes from the front pocket of his white T-shirt. He cupped his hands to light the match and then the cigarette. He pulled a second one from the pack, lit it from the already glowing stick, and handed it to his sister. Gladdy touched her brother’s hand before taking the offering.

“Everything’s going to work out,” Gladdy said. “You’ll see. Daddy will forget all about it once he goes back to work on Monday.”

“He’s not going to forget, Gladdy. Not this,” Alex said. “And neither will I. Do you think you can forget it ever happened?”

“I can try. You can try. Let’s just put it out of our minds as if it never happened. Please, Alex. We have to.”

“Look,” Gladdy poked her brother who was older by ten months.

She pointed to the edge of the shoreline only feet away from where they sat on the sand. The light from the rising moon illuminated the beach in a soft white bath.

“It’s a loggerhead,” Alex said as a sea turtle lumbered out of the ocean and laboriously began its march to the dune line. “You can tell by its big head.”

They sat motionless as the turtle, not more than fifty feet away, pulled itself through the sand. The loggerhead moved slowly but steadily, using first the front right and then the left rear flippers to pull it forward. Then it repeated the action with the other diagonal flippers. Its march from the sea was distinct from the other species of turtles that came ashore in Florida to lay eggs. The green turtle, Kemp’s ridley, the leatherback, and the hawksbill also laid their eggs on the beaches of the peninsula, but loggerheads were by far the most numerous.

The female loggerhead, so graceful as it floated and swam in the ocean, now tromped through the sand dragging nearly 300 pounds of body weight. Every few minutes, it would stop and dig its snout into the sand.

“She’s testing the temperature,” Alex said. “That’s exactly how it was described in that book Daddy threw in the trash tonight.”

Alex read any book he could find about the ocean. Archie Carr just published a book about the sea turtles, and Alex checked the book out of the library in Calico, where the Stokleys lived, before they came to St. George Island for the summer. He’d received special permission to keep it for three months. When his father came to the dinner table that night and saw Alex sitting with his elbows on the table and The Windward Road propped up on his glass of milk, Arthur Stokley snatched the book and walked out through the kitchen to the back porch and threw it in the trash.

“We do not read at the table,” Dr. Stokley said when he returned. “You have the manners of a heathen and the sense of a moron. You never fail to disappoint me.”

“But that was a library book,” Alex said.

“All the more reason not to have it at the dinner table,” Dr. Stokley said. “You’ll have to tell the librarian you lost it, and earn the money to pay for it.”

When the turtle reached the edge of the sea oats and grasses protruding from the dunes, she swept the sand with all four flippers before using her front flippers to push sand out of a large area.

The loggerhead kept rotating her body around the area until a place big enough for her body indented the sand. She used her cupped rear flippers as shovels and began to prepare the cavity for the eggs.

After digging for what seemed like an eternity to the teenagers, the ancient creature placed itself in the body pit with its rear end just at the edge of the cavity. They watched as three eggs dropped into the hole followed by a clear thick liquid. The process was repeated over and over again.

“That’s mucus to keep moisture in the nest while the eggs incubate,” Alex said. “Are you counting how many eggs she’s laid? The book said they can lay up to 200 in one nest.”

After counting 124 eggs, they watched as the sea turtle filled in the cavity with its rear flippers and then swept the area in an effort to disguise what lay beneath the surface.

When the turtle finished her job, nearly two hours after she came from the sea, she began the slow return back to the ocean. Alex rose from the sand and followed the loggerhead.

“Alex, what are you doing? You can’t go swimming after dark – the undertow is too strong.”

“Did you know sea turtles always return to lay their eggs on the beach where they were hatched?” Alex said as he walked backwards into the sea following the trail of the female loggerhead.

“The eggs will hatch in about two months, Gladdy. Be sure to come down here every night and wait for them to emerge so you can help them go home. Remember 124 eggs and remember the location.”

Alex turned toward the ocean and kept walking until the sea engulfed him, and he went under.

“Alex, come back,” Gladdy yelled out over the surf, but the only answer came from the sound of the waves lapping the beach. “We’ll find a way.”
Gladdy pulled the corners of the tablecloth up around her shoulders and waited for her brother to reappear. The waves came back to shore time after time, but as she sat transfixed in her spot on the beach, Alex never returned with them.

And that’s all folks! Have a Lovely Thursday!

Posted on February 13, 2014, in Uncategorized. Bookmark the permalink. 2 Comments.

← Cold Hands. Warm Hearts.
Pygmalion Sculpting Art, Or Groping At Something Else? →