What Makes a Hero? Mini Interviews with Author Tyrean Martinson and Restore the Light Director Dana 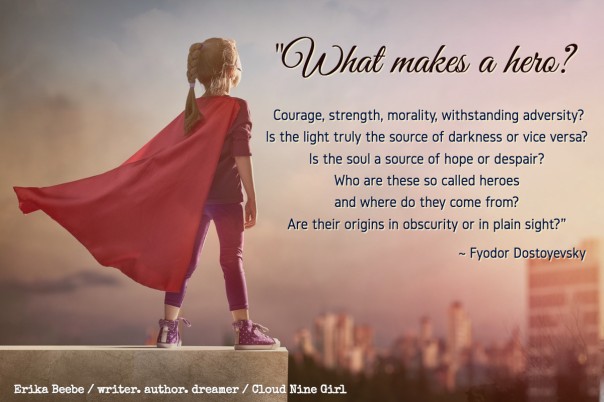 To inspire hope and courage, I dedicate Monday posts through the months of March and April to authors and professionals on the subject of heroes, historically defined, and also the transformation in today’s society. I like to think of this term as the Everyday Hero. Here today, I have fellow author, Tyrean Martinson, answering three questions on the hero topic. I’ll also end this post with my Everyday Hero of the week, Dana, Executive Director of Restore the Light, a Nonprofit Human Trafficking Awareness Organization.

Tyrean’s Story, “Of Words and Swords”

In a time of dragons and dragon-slayers, Maud has lost his taste for battle. He wants only to put his swords to rest and follow his life-long dream to become a bard.

[Erika] What is your definition of ‘hero’ (historically or in today’s world)?

[Tyrean] I think a hero endures hardship and risks his/her life (physical, social, or career) to save or help others or to save the world/community. I think this is true in historical and modern contexts.

Harriet Tubman is an example from American history. An American slave who escaped slavery, she returned to the South to help many slaves escape. She dedicated her life to helping others.

In modern times, we have heroes like Reverend Marin Luther King, Jr. and Mother Teresa, along with all the first responders on 9/11 and many others who give their lives and their time to others.

“When I was a boy and I would see scary things in the news, my mother would say to me, “Look for the helpers. You will always find people who are helping.” – Mr. Rogers

[Erika] How does your hero fit the definition and then finally, why did he or she fall?

[Tyrean] Maud gave up his dream of becoming a bard to become a dragon-slayer. After risking his life many times to save his kingdom from dragons, he’s given a large reward which enables him to pursue his old dream. He thinks that dragons will leave his kingdom alone – after all, he has killed dozens already and no one has seen one in a few years.

Maud falls because he’s tired of killing dragons and he is a bit selfish.

(I know that the current trend for dragons is that they are intelligent, talkative, and noble. Maud has never met a dragon like that.)

Daydreamer, writer, teacher, believer – Tyrean Martinson lives near the Puget Sound with her husband and daughters. With her B.A. in Ed. and English, she teaches writing classes to home-school teens and she writes speculative, contemporary, poetry, experimental hint fiction, and writing books. 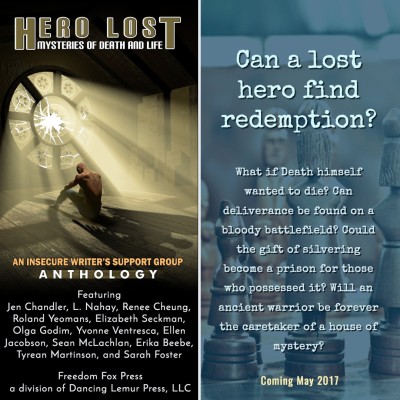 According the U.S. Department of Homeland Security, Human trafficking is defined as:

“Modern-day slavery and involves the use of force, fraud, or coercion to obtain some type of labor or commercial sex act. Every year, millions of men, women, and children are trafficked in countries around the world, including the United States … Human trafficking is a hidden crime as victims rarely come forward to seek help because of language barriers, fear of the traffickers, and/or fear of law enforcement.”

Fact: 100,000 kids are sold into sex trafficking every year.

Fact: Human trafficking is a 32 billion dollar industry, and it’s growing in all 50 states.

Fact: According to Polaris Human Trafficking statics, states in the U.S. closest to water access, major highways and international airports, are number one trafficked locations.

Executive Director Dana, with the Nonprofit Organization, Restore the Light, had her eyes opened wide while sitting in church. Starting the organization from the ground up, Restore the Light aims to educate and be a proactive force for victims of human trafficking. Dana is not just an executive director and founder of this organization, but an assistant principal, a mother, and a wife, an active religious leader and above all things, a believer in standing up for what’s right when the world feels incredibly wrong. Dana is an everyday hero for her heart and her strength. She’s not afraid to say what many people think and are afraid to voice. Dana is a voice. Dana is a lighthouse in the dark.

[Erika] Tell me about the mission of Restore the Light.

[Dana] We aim to educate people about domestic human trafficking, sex trafficking and to increase awareness and allow for intervention of future victims of all ages and all backgrounds. Did you know the average age of entry is 11?

[Erika] Where did your inspiration come from to start this group?

[Dana] Honestly by nature, I have been a protector for the vulnerable. One day, sitting in church, I heard someone talking about people being trafficked from a truck stop 10 minutes from my location. I thought I work with young people. How did I not know that? How can I protect my students, if I don’t know these things? And then I wondered, who else doesn’t know this information? It started as a protection for my students, and now I push to spread the focus to all kids of that age.

[Erika] Where are you now in comparison to where you began?

[Dana] The organization began by word of mouth just talking to people about the definition of human trafficking. Now we have social media, a website and we go to organizations and colleges all over the state. We partner with local police departments to be a lead program. We educate in counselor development programs, coordinate and host defense classes. This year we plan to host a 5k and will continue to reach out to more universities and organizations.

[Erika] How many people do you touch?

[Dana] We touch nearly 250 in most conferences we present at. Recently we were asked to speak at a local chamber ground of 12 individuals. We mostly do presentations and self-defense classes to provide resources. We are about education, prevention, and intervention. The facts state, only 1 – 2 % who traffic actually get rescued. The best way to impact the community is to prevent it from ever happening. Human trafficking is the second fastest growing criminal industry in the United States behind drugs.

[Erika] What’s your biggest moment of making a difference?

[Dana] Honestly, a child came to me and said, “Hey, I heard you know a lot about trafficking, and I am worried about my friend being groomed for sextortion.” She’d believed it was a friend of a friend, but the friend had actually never met that person. So none of the connections were legit. I am glad I talk about human trafficking, so kids know the details. My big push is to teach people how it happens here in Kansas City. It happens world-wide every 30 seconds.

[Erika] Do you have an everyday hero?

[Dana] My mom. She had me as a teen and was basically homeless once she got pregnant with me. We moved a lot. I had 12 homes before I was 10. Still, my mom went to college and worked to get her degree, but she made sure I was taken care of. Now she has her doctorate, teaching in an OT program. She overcame all her struggles and because of her struggle, making excuses has never been an option for me.

[Erika] What struggles does the organization face?

[Dana] Honestly, time. People don’t like to talk about what’s uncomfortable. To hear our message, they have to be okay getting out of their comfort zone and to take off the rose colored glasses to see the ugly. It’s always ugly with kids. The big thing is, you can’t fight what you don’t know exists.

[Erika] What resources can we share with the public? Is there a safe place?

[Dana] To intervene, call law enforcement immediately. Here in KC, we have Veronica’s Voice, Restoration House, and Exodus cry. They work on the restoration side of human trafficking.

Want to know more about Restore the Light?

*RESTORE THE LIGHT IS NOT AN EMERGENCY RESOURCE*
If you are in IMMEDIATE need of assistance or in danger call 911.

If you or someone you know is a victim of human trafficking, contact the National Human Trafficking Resource Center.

Thank you, Tyrean Martinson for being here with me today. I can’t wait to read your story. And Dana, you inspire me to be a better and bigger person.