← A Forgotten Knight, a Dragon, and Computer Technology? Spotlight on Author Renee Cheung
What Makes a Hero? Mini Interviews with Author Tyrean Martinson and Restore the Light Director Dana →

What Makes a Hero: Mini Interview with Author Jen Chandler, and A Local Firefighter

To inspire hope and courage, I dedicate Monday posts through the months of March and April to authors and professionals on the subject of heroes, historically defined, and also the transformation in today’s society. I like to think of this term as the Everyday Hero. Here today, I have fellow author, Jen Chandler, answering three questions on the hero topic. I’ll also end this post with my Everyday Hero of the week.

The Feature Story, “The Mysteries of Death and Life”

Can Death die? Is Death capable of love? A young, homeless woman named Leah meets the Angel of Death in an abandoned church and discovers that he longs for a release from his eternal work. If Leah can’t uncover the reason for his despair, the souls of the dying could be doomed to wander forever.

[Erika] What is your definition of ‘hero’ (historically or in today’s world)?

[Jen] A hero, traditionally speaking, is anyone who finds him/herself addressing a threatening situation either for another person or for society in general and (usually) comes out on top. There are various types of heroes. The one we’re most inundated with at the moment is the Super Hero. A Super Hero is, of course, someone who has superhuman powers in some capacity and uses them the help mankind. I like to think of this as a hero who has heroism imposed upon them because their abilities far out weight those of the average human being. My personal favorite is the Reluctant Hero, or an average person who is willing to do what no one else is, whether by choice or by proxy.

[Erika] How does your hero fit the definition?

[Jen] My story is a little complex in that there are TWO heroes (dun, dun, DUN!). Both of these heroes are Reluctant Heroes even though one of them isn’t human and definitely has superhuman powers.

[Erika] Why did he or she fall?

[Jen] Gaston, my supernatural hero, fell because of his own fault. He becomes burdened by his job or his ‘heroism’ if you will. Leah’s heroism – she’s my human heroine – is much more subtle and understated. Her original fall from grace was caused by her parents’ poor decisions.

Born and raised in the deep, dirty South, Jen Chandler cut her story-telling teeth in the old folktales of Appalachia. She grew up chasing ghosts and gods, devouring the myths and legends of Egypt, Greece, Ireland and the British Isles. Now happily ensconced beneath the moss laden oaks of Savannah, GA, Jen delights in rummaging into the dark corners of stories, re-imaging mythology and collecting ghosts, goblins, and other strange things that tap at the back door of her imagination. When not writing, Jen can be found drinking copious amounts of tea, designing and stitching fabric patterns, studying folk herbalism, and re-reading old copies of British Country Living with frightening regularity. She may or may not be addicted to gummy candy.

You can find her via her Blog 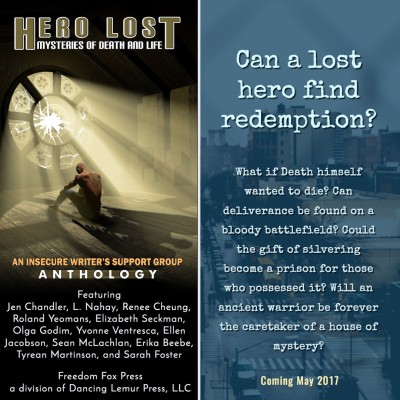 My Everyday Hero This Week: Firefighter/EMT

The shift of a firefighter begins at 8:00 a.m. and completes nearly 24 hours later at 7:30 a.m. Staff prepares and test the equipment. They log every piece into a computer and mark it off as checked. During the week shifts, training classes keep the morning busy. Anything from new medical techniques, to hands-on fire ground related policies. After training comes lunch, testing the fire hoses and inspecting buildings. Calls come in and out and hopefully, the current staff gets to sleep, but not always. Everyone is roused at 7:15 a.m. the following morning, and the clean up begins to prepare for the next crew. Fresh crew members filter in and the last crew clocks out for the day.  Today, I have with me Firefighter A, describing his day, his favorite and scariest moments on the job, as well as some particularly interesting historical facts.  I have to say, this is by far, is the most difficult profession I’ve talked to yet. Firefighters deserve the utmost respect, and definitely more compensation than they get.

Disclaimer: Names and certain details have been changed to protect events and individuals.

[Erika] What is your favorite aspect or responsibility of your job?

[Firefighter A] I like the actual fire-fighting piece. I like driving the fire trucks and acting in the role of the Firefighter Apparatus Engineer. I do the math to get water from point A to point B. Mathematics is critical. I determine the length and size of the hose in comparison to a certain amount of friction loss at the end of the hose. I calculate the length of the hose and the quantity of water pumped out of the truck for how it comes out the end.

[Erika] What was your deciding factor to enter the profession?

[Firefighter A] Every since I was young, I’d be in my grandparent’s yard playing with toy fire trucks. I liked watching the real trucks go by as a kid.

[Erika] What do you remember about the old station Dalmatians?

[Firefighter A] The history of the Dalmatian began in the early 1800s when towns had horse-drawn trucks. The dogs rode on those trucks to guard the equipment. Historical big towns once had several fire companies that would all answer the same fire call. The different companies would duke it out, and the winner would put the fire out while the dogs guarded the equipment against theft. It became a tradition and dogs got associated with the fire service, but we can’t do that anymore.

[Erika] What’s your proudest moment on the job?

[Firefighter A] I was pretty young, maybe 22. I was driving the engine from my station to answer a call for backup. We got to the business site. All men were in the building. No one remained to track the water. My captain said, “You go over there and get on their pump.” It was a different truck, and it took me a moment to figure out all the buttons. I did it. I got the water supply stabilized on a truck I wasn’t familiar with. I received several compliments for my act.

[Erika] What would have happened had you not been there?

[Firefighter A] If I wouldn’t have shown up, that’s a dangerous thing to have guys inside the structure and no one outside. All of a sudden they have no water if something goes wrong.

[Firefighter A] If I drive the truck the other guys jump off. My job as the driver is to make sure they have water and the pressure, where the nearest fire hydrant supply is or get another truck to get to another hydrant. My responsibility is to then monitor the water flow. From the fighter side, we get to the scene and assess the situation to plan the best way to attack the fire. Sometimes you find it and put it out and sometimes you don’t. Sometimes the new type of building construction is so lightweight, and buildings fail fast. You don’t send your guys inside if it’s going to fail. In a house fire, we first get down on our hands and knees at the door because that’s where the coolest air is. Hollywood glamorizes fires. Seen backdraft? That’s not real. They make it look easier than it really is. Honestly, you can’t see anything, zero visibility. You walk into a building or room and the scene is black as night. It’s hot like 1500 and 2000 degrees. We’ll try to find the fire. Now we have thermal imagining cameras that make it easier to find the fire or victims. Modern building construction makes our job dangerous and difficult. It used to be everything was made of wood and semi-combustible material. Nowadays buildings are synthetic nasty blends and fires are more hazardous. 60% of firefighters today are likely to contract ear nose and throat cancer because fires burn hotter and faster. The smoke is poison because of the materials. In the past, the smoke rolled up the window as a byproduct of fire, but now the smoke actually acts like a fuel and the whole room will go … in a blink. You have to be trained to recognize that moment. We are continually challenged to change our tactics. How we read the smoke, how close fire is to the window, how hot the room is. Failure to recognize a flash over, which is when the whole room bursts into flame, is what kills guys.

New policies state after every fire, we launder our fire gear and get a clean one for the next incident. We all take showers because of the risk of cancer and chemicals. They have done studies on firefighters right after a job using a black light to track the chemicals and the exposure of the soot. It’s always highly concentrated around the head and neck.

[Erika] Do you have an everyday hero?

[Firefighter A] My grandfather and my great uncle. I try to model myself after them. Good men. Showed my brother and me how to be good men. How to carry on with a sense of integrity. How to love someone and to treat people nice.

[Erika] Last words to the public?

It’s a good career and it’s a good honest living. You get to help and make a difference.

[Erika] Any words of advice?

Be nice to your firefighter.

Thank you, Jen Chandler for being here with me today. I can’t wait to read your story. And Firefighter A, you amaze me.

Posted on March 20, 2017, in Uncategorized. Bookmark the permalink. 20 Comments.

← A Forgotten Knight, a Dragon, and Computer Technology? Spotlight on Author Renee Cheung
What Makes a Hero? Mini Interviews with Author Tyrean Martinson and Restore the Light Director Dana →