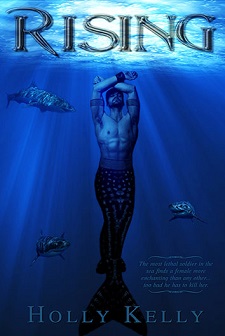 I remember being five or six and visiting my cousins in Oklahoma when I first learned about mermaids. Tuckered out, we piled in the bed and ended the night watching The Little Mermaid, an older version and truer to the tale written by Hans Christian Andersen. I fell in love with their half-human/half-dolphinlike bodies, the ability to swim to the depths of unchartered waters, and their hypnotizing voices. Glued to the television, possibility spun in my mind. Could they really exist? Then the Little Mermaid turned to foam, and I have to admit, I was sad. I wanted a happy ending for her.

Mermaid tales have a soft spot in my heart, especially if they have a hopeful twist. When I saw Holly Kelly’s cover for Rising, I had to read it. From the beautiful cover to the title of the book, I believed it wouldn’t let me down, and it didn’t.

So with my brief introduction to mermaids and happy endings, welcome to Holly Kelly’s blog tour, an interview with the author, and my review of her book Rising.

A Bit About the Book

Title: Rising
Author:  Holly Kelly
Published:  September 6th, 2013
Publisher:  Clean Teen Publishing
Word Count:  approx. 76,000
Genre: New Adult Paranormal Romance
Recommended Age:  16+
Synopsis: In a war between the humans and the inhabitants of the sea—humans will lose. Xanthus Dimitriou—the most lethal Dagonian to rise from the ocean—is on a mission to save mankind from annihilation. But first there’s one small thing he needs to do… kill a beautiful young woman in a wheelchair.
Killing her doesn’t start out as part of his plan. He entrenches himself deep in the human world. Aligning himself with his enemies, he prepares to send them to Triton to face their punishment. Then Sara Taylor rolls onto the scene. Xanthus knows at once she’s a criminal. And her crime? Being born. She’s a human/Dagonian half-breed, an abomination. Killing her should be an easy job. All he has to do is break into her apartment, slit her throat, and feed her body to the sharks. Simple, right? Wrong. If only she weren’t so beautiful, so innocent, so sweet…
Saving the world may have to wait. It appears Xanthus has a woman to save. But protecting her may cost him his own life.
Where you can buy the book:
Amazon| Barnes & Noble | GoodReads

Holly Kelly wowed me with her first sentence in chapter one: “Xanthus could taste the blood of a human in the sea water.”

She continued to draw me in with her word choice in the sentences and paragraphs that followed. Vivid, visual, I sunk quickly into the plot and wanted to know why and what did we “humans” do to Xanthus, one of the main characters in the book.

Holly Kelly created this alternative underwater world, exploring the details from the architecture of the cities, to the life dwelling in the depths of the sea. First of all, I want to say how difficult it is to paint a new and different world other than human. A world separate and foreign to what we live and know. I am always in awe of an author who can create this different picture, which leads to my second point, I believed her. Holly Kelly convinced me this world was real: “The Castle of Triton rose in the distance—a colossal fortress with many tall turrets, arched buttresses, and massive windows. Hundreds of sharks circled above and around the castle, guarding their master inside.” (16)

Her heroine Sara intrigued me. A strong twenty-something female, she lived with a huge disability since her birth. She constantly had all these conflicting emotions swimming in her head about herself, her disability, and the doctors who always wanted to fix her. I liked her drive to survive and succeed the most. I found myself relating to Sara, remembering how at one point I wanted to succeed like that, no matter how hard I had to work to pay the bills. I also loved the constant reminder of her insecurities. I think we all have them, and she felt like a real person. I understood her actions.

… And Now For The Interview 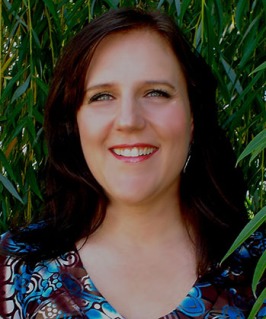 Where did the idea for your book begin?
It all started with a painting of a mermaid I came across online. It was a beautiful, compelling picture. In that picture, there was mermaid with a tail. The tail was not covered in fish scales like the typical mermaid, but skin like ours. It got me thinking… What if a mermaid was born on land, but she didn’t know she was a mermaid. She just thought she was horribly deformed. It was at this point I started writing Sara’s story.
Tell me about your desire to write. When did you know it was something you really wanted to do?

I’ve always loved to read. It’s been a passion of mine. But writing…? I didn’t really think too much about it. I never really did well in my English classes, so I thought I didn’t have what it took. Then one day I was surfing the web and came across some of Stephanie Meyer’s early work. It wasn’t very good. Then I thought, well if she could suck this bad and still be able to write something like Twilight, maybe I could learn to write too. I didn’t understand what I was in for. Five years and four books later I finally learned how to write well enough to get published. I don’t talk about my first three books. Let’s just say they were my learning books. But I’ve loved writing ever since. My only regret is that I didn’t start writing earlier in my life.

When you develop characters, how do you begin?

I start out with an idea of a character. I come up with a scene and a back-story as to how the character got to this point. Then I let the characters speak for themselves. The story reveals the characters. I get to know them like you do—through the telling of the story.

How long have you been working with the storyline and characters in this book?

I worked on this book for a year and a half. A lot of time was spent revising the heck out of it as I learned principles of writing. And then I tried to get it published after a year, but it wasn’t really ready and I didn’t get much response. After I did a major rewrite, I felt it was better and began resubmitting. This time it was accepted by a publisher fairly quickly.

Many authors use a music list or have specific songs when they write. What were a few of your song choices and why?

I was on an Evanescence kick while I wrote this book. Some of my favorites are Together Again, Bring Me To Life, My Immortal, and Sweet Sacrifice. I also listened to Radioactive (Imagine Dragons) and a lot of rock—Daughtry, Nickleback, Lifehouse…

Where do you write? An inspiring safe place?

I write in my living room or kitchen—while my kids are in school. My youngest is still home so I always have to be aware of where he is. If my older kids are home and can watch their little brother, I’ll hide away and write in my bedroom, and yes, occasionally in the bathroom too.

What 1-2 surprises came up as you were writing this story?

Practically the whole book was a surprise. I began writing with just a character and an idea. The rest came to me as I wrote. One thing that didn’t come to me right away was how the heck they’d get out of Panthon Prison. That one came to me only after thinking about it for a long time. But when I did think of it, it was a “Eureka!” moment.

Briefly tell me about a memory of you growing up, and how it defines your character.

I grew up in a small town in Kansas—a place where an imagination could flourish. Truly, there wasn’t much interesting there, so I had to create excitement in my own head.

What one piece of advice can you give aspiring authors about making their dreams of becoming published come true?

That question is easy. Write, write, write and read, read, read in equal amounts. Then intensively study the craft of writing, learning all the ins and outs of it. Finally, never give up. Keep writing, keep working on becoming a better writer, and don’t let anyone stop you.

About the Author:
Holly Kelly is a mom who writes books in her spare time: translation–She hides in the bathroom with her laptop and locks the door while the kids destroy the house and smear peanut butter on the walls.

Holly was born in Utah but lived in Salina, Kansas until she was 13 and in Garland, Texas until she was 18. She’s now back in Utah–“happy valley”. Holly is married to her wonderful husband, James, and the two of them are currently raising 6 rambunctious children. Her interests are reading, writing (or course), martial arts, visual arts, and spending time with family.

Posted on September 18, 2013, in Uncategorized. Bookmark the permalink. 1 Comment.